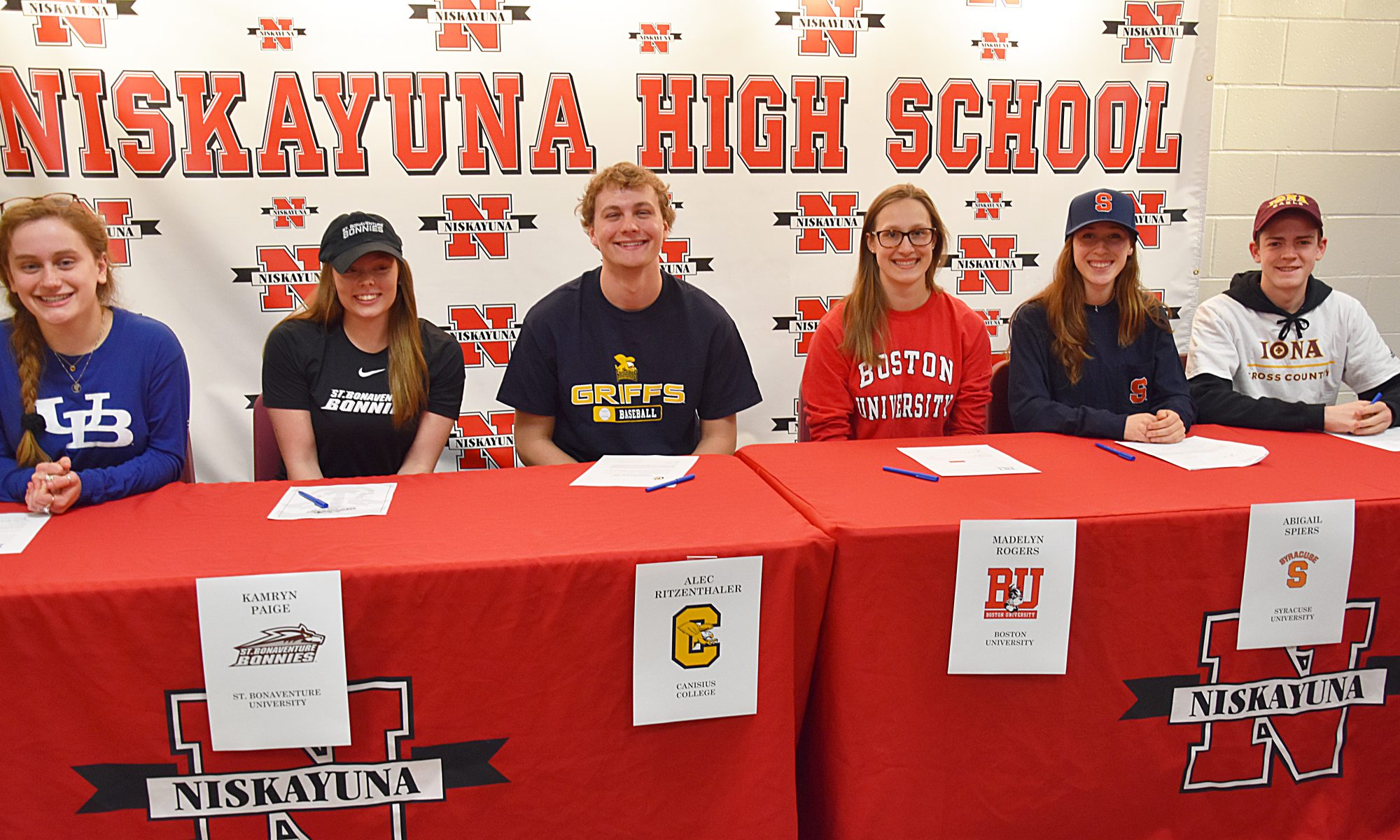 For the student-athletes, the letter represents a formal commitment to the athletic program at their respective colleges and universities, and it also signifies the opportunity for funding for tuition, room and board, and other expenses to be funded over the next 5 years.

Niskayuna High School started the signing ceremony tradition at in 1997 and it has become a part of the high school culture. With Wednesday’s signing class, there are now more than 400 students who have signed to compete at the Division I or Division II levels.

Another group of thirteen student-athletes from the Class of 2018 committed to their schools in a signing ceremony back in November.

Jillian was a member of the Section II Champion swimming and diving team and is in the top ten percent of her graduating class.

She was a 4-year member of our Swimming and Diving Team and won two consecutive team Section Titles. In 2014, she finished in the top 15 in Section II. She recorded 223.10 points in 2017 in a key win against Shenendehowa. In Sectionals, she placed in the top 15 once again with 391.70 points.

She will swim for Coach Andy Bashor in the Mid-American Conference.

Kamryn is competitive different events.  She swims for both Niskayuna High School and the Adirondack Bluefins.

At St. Bonaventure she will swim for Coach Brian Thomas in the Atlantic 10 Conference.

Alec is a member of our Section II Champion baseball team. He posted a 4-0 record last year as a pitcher with a 1.01 ERA. He pitched brilliantly in our Section 2 title game vs. Shenendehowa.

He earned 1st Team Times Union All-Star honors and is ranked in the top 150 baseball players in all of New York State. At Niskayuna, he has earned scholar athlete status in both baseball and basketball seasons.

Alec will pitch for Coach Matt Mazurek at Canisius in the Metro Atlantic Athletic Conference.

Madelyn is a four-year member of our rowing program. She was part of the 2016 Girls Junior 8 team that won the Triple Crown. They won the State, Regional and National Championships. She also won gold in 2015 in the Junior 8 and finished 3rd in 2017 in the Senior 8.

Maddie will graduate in the top 15 percent of her class and will row for Coach Madeline Davis in the Women’s Lightweight Team in the America East Conference.

In cross country, Abigail finished second in Section II and went on to compete at the State meet. She holds numerous course records around the state.

She will run for Coach Chris Fox in the Atlantic Coast Conference.

Donnovan is a member of our Section II Champion cross country team. He also is a star for our indoor and outdoor track teams. He is the school record holder for the mile, with a  time of 4:17.76.

He will run for Coach Joe Pienta in the Metro Atlantic Athletic Conference.