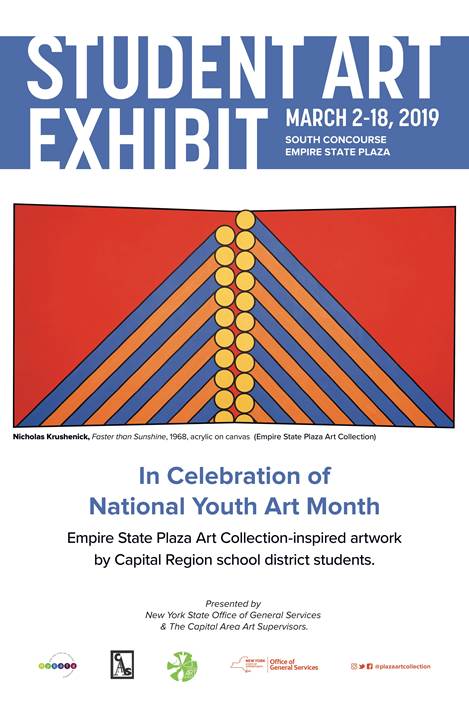 Congratulations to the following Niskayuna students who have had their artwork selected for display at the tenth annual K-8 Empire State Plaza Regional Art Collection Exhibit:

This event is a one of a kind, as it is the only Capital Region exhibition for K-8 students. This year’s exhibition is representative of over 1,400 works from 17 surrounding Capital Region school districts. The student’s artwork was inspired by artwork from the Empire State Plaza Collection, which consists of 92 works of Abstract Expressionist art displayed both in and around the Plaza. It was established under the direction of former Governor Nelson A. Rockefeller during construction of the Empire State Plaza (1966–1978).

The exhibit is being held in conjunction with National Youth Art Month and is sponsored by the NYS Office of General Services, the Capital Area Art Supervisors (CAAS) group and the New York State Art Teacher’s Association (NYSATA).

The student artwork will be on display at the Empire State Plaza from March 2-18, 2019 on the South Concourse, closest to the Madison Avenue entrance.