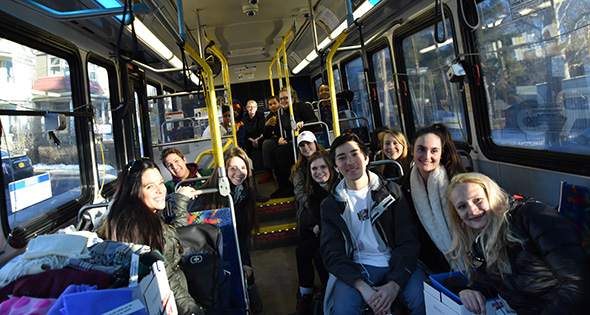 Students look to strengthen connection between their schools

A group of Niskayuna and Schenectady high school students spent Thursday afternoon spreading warmth and kindness along State Street in the form of nearly 500 scarves decorated with messages of hope tied to street signs, poles, and railings, left for anyone who could use one.

A group of 25 students have forged a partnership between the two schools this year and the scarf project was their first joint activity. They first came together through peer leadership training sponsored this fall by the Anti-Defamation League.

“We wanted to keep meeting with each other and we came up with the idea to do something to help our community,” said Jessica Grant, a senior at Schenectady High School.

CDTA also joined in the partnership, providing transportation for students along the State Street corridor. At three stops from Liberty Park through the area of Steuben and State streets, students quickly fanned out, working in small teams to leave the scarves – and inspirational messages – where they were likely to be spotted and put to good use.

Both schools collected the scarves in recent weeks, and donations poured in from staff, students and families.

“It’s fun to do something to give back to people who don’t have a lot,” said Dey’lon Edmonds, a Niskayuna High School junior.

Aside from Thursday’s activity, the students have met twice so far this year to learn more about each other’s schools and discuss issues of diversity, inclusion and what they can do to bring their neighboring communities together. The group includes members of Niskayuna High School’s SAPE club (Students Advocating for a Positive Environment), an existing Anti-Defamation League initiative and the Power of Peace Club in Schenectady, as well as others who wanted to be involved in the new partnership.

Students say they continue to be struck by how close their two schools are geographically, and the ways that they are alike and different. They noted that students who attend one school often have preconceived ideas about what it is like at the other one –  and it is helpful to come together and realize that these perceptions are not often true.

“For us to put that aside and do something for other people, it shows everyone that they can do something,” said KeyLynn Belrose-Westfall, a Schenectady High School senior.

The students have also been discussing the possibility of organizing a community service day late this spring.

Both high schools would like to thank the Capital District Transportation Authority (CDTA) for generously agreeing to provide transportation for Thursday’s activity as part of its ongoing partnership with the schools.