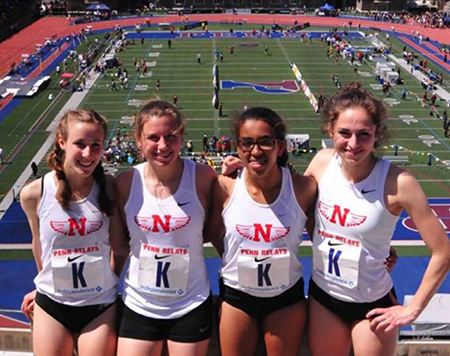 Relay team returns from Philadelphia with a school record, entry into national championship

Niskayuna’s All-American 4x800m relay team made their spring season debut in national competition at the prestigious Penn Relays at the University of Pennsylvania in late April. Senior Erica Wasserbach and juniors Amelia Kokernak, Sydney Smith, and Abigail Spiers qualified for entry into Penn Relays with their championship win and US No. 1 high school time at the Millrose Games in New York City during the indoor track season. The girls competed on Thursday, April 27, at Penn’s Franklin Field against over 70 other relay teams from the United States and Jamaica and placed 4th in their heat and 11th overall in that day’s events to earn a spot in the Championship of America 4x800m race on Friday, April 28. There, they placed 10th in the race that is the nation’s most elite high school outdoor track competition. They returned home from Philadelphia with a new spring track school 4x800m record of 9:12.39, surpassing the existing record of 9:15.3 set in 2010. The relay team’s performance there also qualified for a a spot in the New Balance Outdoor National Championship in North Carolina in late June.