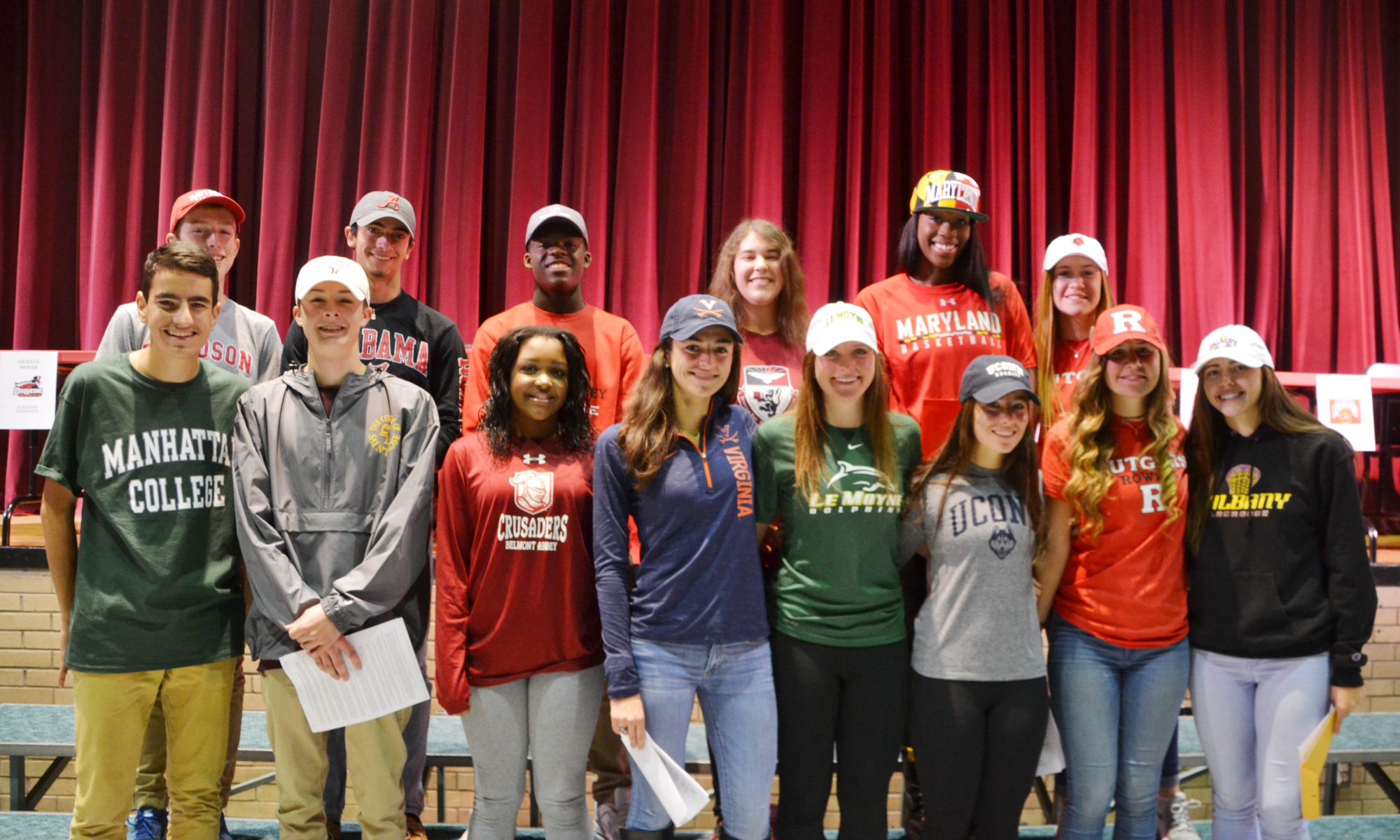 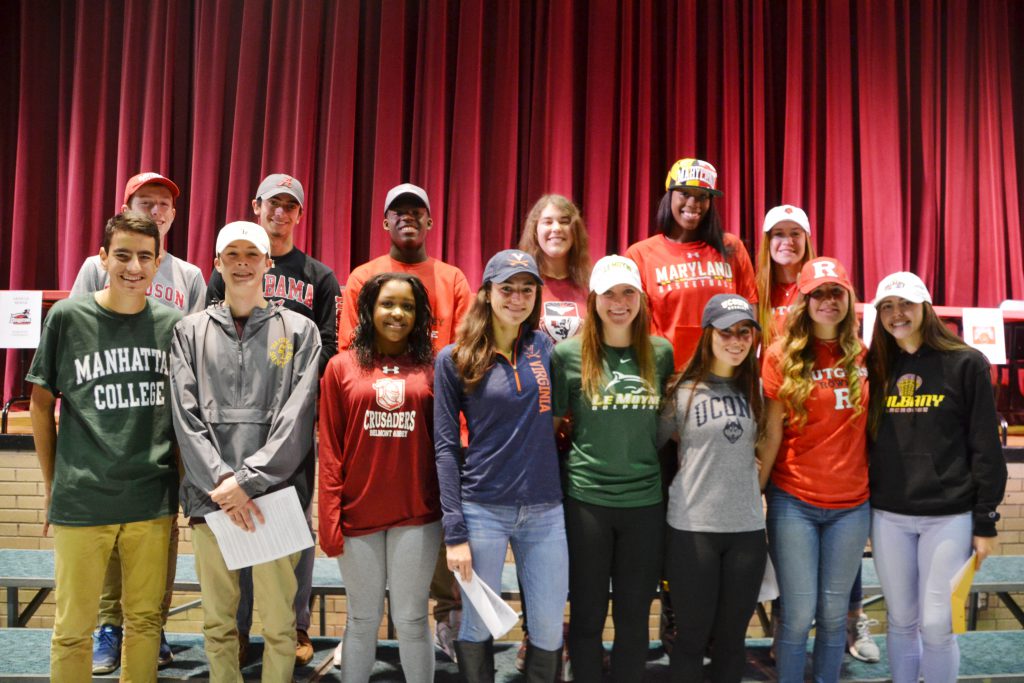 Decorated athletes and scholars ready to compete at the next level

They are scholar-athletes, state and sectional champions, student leaders, and Silver Warriors all. And on Wednesday, Nov. 8, a group of 14 Niskayuna High School student-athletes took the next step into their futures by signing their National Letters of Intent in a ceremony at the school.

Wednesday marks the beginning of the NCAA signing period for student-athletes all across the country.

For the student-athletes, the letter represents a formal commitment to the athletic program at their respective colleges and universities, and it also signifies the opportunity for funding for tuition, room and board, and other expenses to be funded over the next 5 years.

Niskayuna High School started the signing ceremony tradition at in 1997 and it has become a part of the high school culture. With Wednesday’s signing class, there are now more than 400 students who have signed to compete at the Division I or Division II levels.

Arielle was recently named to the USA Rowing Scholastic Honor Roll for her performance as both a rower and a student. She was a part of Niskayuna’s 2016 “Triple Crown” Girls Junior 8+ team that won the state, regional and national championships.

Allie will join her former soccer teammate and 2017 Graduate Erica Wasserbach at Le Moyne College. A member of Niskayuna’s 2016 Section 2 championship team and this year’s runner-up team, Allie played in 40 games with 37 starts totaling 9 Goals and 14 assists over the course of her career.

Amelia is a three-sport athlete, participating in Cross Country, Indoor Track and Outdoor Track, as well as a Scholar-Athlete. Amelia was a Times Union 1st Team performer in the Spring of 2017 for Outdoor Track, All-Suburban Council for her time in the 800 meters of 2:17.57, a captain of the 2016 and 2017 Section 2 champion Indoor track team. Amelia was also part of the 4×800 relay team that posted the fasted time in the nation in 2017.

Jack Lombardo is a two-time Section Champion and a three-time New York State Medalist in Boys Junior 8+. In 2015, he was a member of the winning Boys Varsity Quad 4 at the the Head of Fish Regatta. He has also participated in the prestigious Royal Canadian Henley Regatta three times and in 2016 finished in the top 8 against teams from Germany, France, and Australia.

Izzy Lynch is a four-year member of the Varsity Soccer Program and a two-time Section 2 champion. She is a three-time all Suburban Council performer and has earned All State and Regional All-American Status, in addition to being named the 2017 Suburban Council Co-Player of the Year. She played in 78 games with 61 starts and a total of 45 goals and 30 assists.

Emily Meade took 3rd Place- Girls Senior 8+ at the New York State Scholastic Rowing Association Championships in 2017 and won gold at the Women’s U23 Lightweight 8+ at the Royal Canadian Henley Regatta. She was a part of Niskayuna’s 2016 “Triple Crown” Girls Junior 8+ team that won the state, regional and national championships. Emily is ranked 24th in the Nation for Junior Indoor Rowing.

Hannah Meade is won gold in 2017 in the Women’s U23 Lightweight 8+ at the Royal Canadian Henley Regatta and was part of Niskayuna’s 2016 “Triple Crown” Girls Junior 8+ team that won the state, regional and national championships. In 2015, she took 1st Place in the Girls Junior Lightweight 4+, 2015 Head of the Fish and 2nd place at the World Indoor Rowing Championships. Hannah is ranked 31st in the Nation for Junior Indoor Rowing.

Olivia Owens is receiving a full athletic scholarship to play for the University of Maryland. Widely considered among the top 50 high school players in the nation, she has been a two-time all Suburban Council honoree and has earned Scholar-Athlete recognition. In her junior year, she averaged 20.6 points per game and 12.3 rebounds per game for Niskayuna. The senior class president is the all-time leading rebounder in Niskayuna High School history.

Tori Pantalone is a two-time Section 2 Champion in Girls Lacrosse in both the 2016 and 2017 seasons. She has 15 career goals and 8 assists and becomes the 16th athlete in our school’s history to sign with UAlbany.

Nick Rumsey has been a three-year member of the Varsity Golf Team and a state qualifier in two of those seasons. This year, he shot a season best 34 on two separate occasions. Nick has also competed in several prestigious area golf tournaments, including the Northeast New York Junior Championships.

Kamren Thomas will be a three-year Varsity letter-winner in lacrosse in 2018 and has participated in 38 varsity contests overall on a team that went 32-6 in that time. Kamren has collected 42 career ground balls on teams that have been ranked locally, statewide and nationally. Kamren is also a two-year varsity football player and was one of the leading Receivers in Section 2 this fall.

Aamani Thomas joined her brother on Wednesday with a ceremonial signing. She is graduating Niskayuna a year early, and although she did not participate in the Niskayuna fall cheer team, she impressed the coach at Belmont-Abbey and will cheer at the North Carolina school.