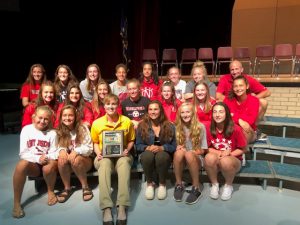 Starting as an 8th grader, Armstrong played in 113 Varsity soccer games for Niskayuna, with a record of 95 wins, eight losses, and ten ties over that time. Armstrong is second on the state record list for shutouts with 74.

Over her five seasons on varsity, she played every minute of every game and helped Niskayuna win Class A NYSPHSAA titles in 1994, 1995, and 1998. She went on to play four years at Division 1 Duquesne University, where she started and captained the team in her junior and senior seasons.

Previous Post Previous Post
A Note from the Superintendent about Social Media
Next Post Next Post
Michael Kovall to be Iroquois Middle School Assistant Principal; Imran Abbasi to be Director of World Language, Social Studies, and English as a New Language