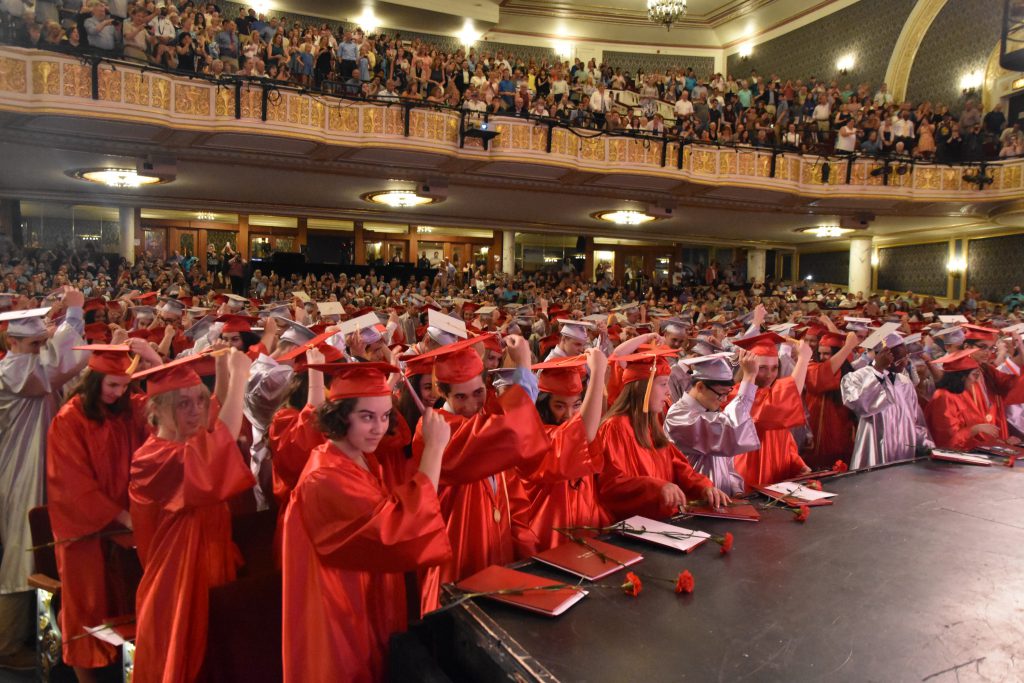 By the time they made it to the stage at Proctors Theater to receive their diplomas, members of the Class of 2019 have already demonstrated that they are active and thoughtful citizens who can make their voices heard on issues and causes near and far.

And judging from the commencement ceremony on Thursday, June 27, they are well prepared to keep doing so – and to make some music, joy and memories along the way.

“Not only have we experienced life within Niskayuna, but we have experienced issues locally and globally. We have lived through groundbreaking moments,” Class President Tessa Hilt said in greeting classmates and guests. She cited social unrest, hate crimes, climate change and other isssues that already had the attention of fellow graduates.

“The issues I mentioned before are only a handful of many that our generation, our class will face in the future, but I cannot think of a better group of people to take on the challenge,” Hilt said. “I know that our passionate activists, our student-athletes, our magnificent musicians, our talented artists and our future scientists and craftsmen will use their talents to leave a legacy in the world as they are and have in Niskayuna.”

Niskayuna High School’s 61st graduating class, a total of 343 students received diplomas on Thursday. Hilt served as master of ceremonies and thanked teachers, staff and administrators for all that they did for the class and school. Hilt’s remarks alternated between humorous references to life at Niskayuna High School these pasts four years and looking ahead to the world she and her classmates are ready to take on.

Superintendent Cosimo Tangorra, Jr. said that as he reflected on this class, he was struck by the fact that responsibility, community and sustainability was at the heart of each interaction.

“In a time of rapid change, societal strife and challenges, you have unquestionably chosen to be part of the solution, you have chosen to build community,” Dr. Tangorra said. “We are proud of each and every one of you.”

Each year, the Hall of Fame inductee addresses graduates. Reilly noted that just like his class and many others, the Class of 2019 is prepared for what comes next. He wove his remarks around words that he learned in the Army – service, luck, risk and civility – and urged graduates to reflect on them.

Reilly noted that there are two kinds luck and that graduates can influence which type is part of their life.

“Luck is the intersection of preparation and opportunity,” he said. “Be prepared when opportunity knocks. …Look for it. You’ll see good luck in everything you do. Preparation is the key.”

He encouraged them to embrace service, noting that comes in many different forms – to family, faith, nation and community. He advised to let your dreams guide your plans, and move toward them one step at a time.

Three stellar musical performances by groups of graduates were interspersed throughout the program: The Beatle’s, “In My Life,” “Come Alive” from “The Greatest Showman” and “The Middle” by Jimmy Eat World.”

Class officers recognized their advisors, Mary Jane McPherson and Joanna Reader, and made donations to local and national charities in honor of school administrators.

The class gift, a stone bench by the main entrance was also announced. The goal is it for to be another place where students can gather and make memories.

That’s exactly what the Class of 2019 did during their time in Niskayuna: man memories.

“The grades and scores, likes and dislikes aren’t what we’re going to remember about high school,” Hilt said in her opening remarks. “It is the opportunities we took on, the knowledge we acquired, and lifelong friendships we have secured that will really shape our memories of Niskayuna High School.